Skip to Content
Home Travels Vegan in Paris
by 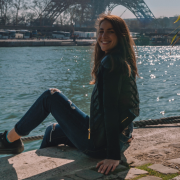 It’s been a while since I last wrote a blogpost. So let’s just jump into it with some facts about Paris to losen it up!

Paris (pronounced [paˈʁi]), megacity and capital of France with a population of 2.2 million is the 5th largest city in Europe. With an area of only 105 square kilometers Paris is relatively small yet populous. It’s also the second most expensive city in the world which I find quite astounding!

My boyfriend and I have visited Paris before but it was our first stay as vegans this time. We’re always staying at his brother’s apartment but as he has subtenants living there we didn’t use the kitchen much. Actually we didn’t use it at all. That’s why we had a loooot of time to test a few restaurants in Paris and I’m going to share them with you now.

By the way, Paris is divided in “Arrondissements” and most of the vegan & vegetarian restaurants are located in the 2nd, 3rd and 10th ARR. Spoiler: You’ll read “this is close to the Centre Pompidou” a lot!

Located in 6 Rue Mandar, 75002 Paris this cafe is within perfect walking distance (only 1km) to the Louvre, Pont Neuf and the Seine and can be arrived easily by taking the metro to “Sentier”.

When we arrived in Paris I was craving croissants like crazy. That’s why I chose this little café. It’s 100% vegan, they have a breakfast and lunch menu, offer a variety of cakes (e.g. Black Forest Cake) , muffins & cupcakes, vegan croissants (YES YES YES!), salads, sandwiches and soups which you can also chose to go. Get ready for some drool worthy shots!

We had to visit this cafe twice because we both loved it so much. The food was really delicious, the prices reasonable and the atmosphere cozy and welcoming. Just make this café a must visit for your upcoming Paris travels. I promise you won’t regret it!

Although I’ve never been in a pub before this restaurant really reminded me of one! It’s located in 23 Avenue Simon Bolivar, 75019 Paris close to the Parc de Buttes-Chaumont in Belleville and can be easily arrived from the station “Pyrénées”.

In the evenings they serve Tapas (decent sized portions though, not to be compared to German Tapas places!) at this vegan restaurant. However they also offer a few plates which comforted me as I’m super skeptical about Tapas. What we found really exciting was that they offer a variety of homemade cheeses and mock meats. We actually went there a second time to try the vegan cheese plate but they didn’t have any vegan cheeses that day *sobs*.

If you’re looking for a clean healthy meal this resto is probably not the right choice. However the food is delicious and they offer AMAZING alternatives (vegan cheeses, mock meats, desserts) and as you don’t have to eat 100% clean everyday this place is still a great choice. Some of the food was quite spicy and oily though, the coleslaw salad wasn’t bad but I would have preferred a green salad. Regardless I feel like this would be a great place to bring a non-vegan to and show them that there are a lot of cruelty-free alternatives that taste GOOD. To sum it up the food is good, the portions huge and the staff très sympa.

Next on is this little fully vegan and organic boulangerie. It is located on 53 Rue Mouffetard, 75005 Paris and really close to Paris’ botanical garden, the Panthéon and the Notre-Dame. The closest Metro station is “Place Monge”.

Unfortunately I didn’t take a lot of photos there. There’s a video on my Instagram highlight “Paris” though where I’m showing what they offered. When we had lunch there they offered lasagna, a bolognese baguette and a rice salad. Apart from that they have vegan cupcakes, cheesecakes, typical French pastries and sell vegan cheeses and supplements.

We went for the Bolognese Baguette for lunch which didn’t look special and judging by it’s name I was really leery. However it was a nice quick lunch, the “cheese” they had added to it was super delicious and it was quite a bit cheaper than our usual lunches. Don’t expect a nice place to sit in though, it’s really basic and minimalistic. We treated us to cookies before we left and took them to go. They were super crunchy and delicious!

If you’re looking for vegan or gluten-free crêpes in Paris this place situated in 4 Rue du Fer À Moulin, 75005 Paris reachable from “Censier-Daubenton” is definitely worth a visit. Afterwards you could stroll in the Botanical Garden.

This vegetarian & organic crêperie offered a student’s menu which we ordered. For 16 euros we got a savory buckwheat and a sweet spelt crêpe plus a mug of cider.

Considering this was breakfast & lunch for us the 32 euros we paid were quite a good offer even though “normal crêpes” might be less expensive. Here we also got water, cider and two filling crepes each.

The buckwheat crêpe is gluten-free. It was a little crumbly and if you’ve never tried buckwheat it might taste weird to you at first. I must say that I love buckwheat though and it’s really satiating. The spelt crêpe was soft and really delicious. Moreover the staff is friendly and you’ll be able to communicate with them in either German, English or French.

Fun fact: Whilst eating out in Paris is quite expensive the tip is already included in the price. Most restaurants will also bring you a carafe of water.

A 100% vegan pizza place sounds like a dream, right? You can find this eatery in 18 Rue des Gravilliers, 75003 Paris. The Centre Pompidou and the Notre-Dame are reachable within a 10-15 minutes walk.

This was actually a recommendation I got from you guys and we saved it for our last night. After packing up our suitcases it was pizza time! Our dinner here was so cheap compared to the other restaurants we’ve been visiting. Whilst most of them were really fancy and organic it was nice to have pizza for a change.

Even though this is a self-service restaurant it was pretty cosy, with quite a few sit-in tables. We ordered a menu and had a 4 pieces of pizza each, a drink, shared a salad and 3 desserts. The third picture was our second order haha – yepp, we’re really hungry. And the pizza was just too good to not order twice!

This vegan restaurant on 24 Rue Rambuteau, 75003 Paris was one that I chose for our monthly-versary (is there even a word like anniversary but for months in English?). It’s really close to the Centre Pompidou as most of the other restaurants too.

The food here was a little bit more expensive (mains were 16-18 euros) but as it was a fully vegan and organic restaurant offering traditional French dishes we hat to give it a try. The food tasted incredibly good and as we had a special occasion it was okay to dine a little fancier and more expensive than usual.

The onion soup was actually the main reason why I wanted to have dinner here. I’ve read about it on so many blogs and although I usually don’t like onions I really enjoyed the soup. Their homemade vegan cheese was straight out of heaven! My main dish was the buckwheat crêpe which was filled with veggies and vegan cheese, my boyfriend had the vegan lasagna. For dessert we couldn’t chose between crème brûlée and mousse au chocolat some got both – a decision we did not regret. Everything was so good, tasted really authentic. No need the eat animal products when there are places like this!

I’d highly recommend reserving a table though! This restaurant is really popular and we had to sit outside because we didn’t get a table. Furthermore the area is really busy and I wouldn’t recommend sitting outside if you don’t want to worry about your stuff being stolen or weird men interrupting your dinner in search of an argument. This happened to us and was quite stressful. The waiters were really helpful though. Just make sure you can sit inside.

OMG – favorite place ever!!! They actually have 6 cafés in Paris. We visited the one in 55 Rue Charlot, 75003 Paris which is near the Musée National Picasso and the Centre Pompidou. You could take the metro to “Arts et Métiers” which is the coolest & prettiest station if you ask me.

Although this food heaven is not 100% vegan (because of a coffee with ghee on their menu) everything else is vegan. I’m not sure whether they are fully gluten-free but they have many gf options. I felt so at home here even though it’s a busy and popular café. They have everything j’adore: Smoothies, smoothie and nice cream bowls, oatmeal, cookies, muffins and amazing vegan cakes. Their menu is huuuuge. They also have a diversified take-away section where you can choose between several salads, juices, sandwiches, …

At our first visit I ordered the açaí bowl which was a little more expensive (50cents-1euro) than the one at Cloud Cakes. However it was way more satiating because they add a lot of their homemade buckwheat granola plus they have bigger portions. High-quality food has its price so don’t expect to have a super cheap meal here although we paid about 40 euros for breakfast and lunch (we went with the sandwiches and they were really good!) which is like 10 euros a meal so it’s not too expensive in my opinion.

Regular restaurants in Paris aren’t really vegan friendly but as you can see there are a lot of great restaurants and cafés you could go to and there are SO many more. Some of the places I want to visit next time are:

These are all vegan cafés/restaurants and there are still SO many more! I highly recommend downloading the App “Happy Cow”. Wherever you are you’ll be able to see which restaurants near you offer vegan options or are fully vegan and I think it’s really helpful for both towns and large cites.

I hope you liked this blogpost and that it wasn’t too long. Let me know if you try some of these recommendations when you’re in Paris. Everything I’ve had during these 5 days was incredibly tasty and I’d love to hear about your experiences. Maybe you’ve already been to one of these restaurants? What were your thoughts on it?

Niki is a 22-year-old dentistry student from Germany. She loves to inform herself on nutrition and shares healthy vegan recipes with her followers on Instagram.